The former location for the TV Series The Bill has recently been transformed into dynamic new production facilities for Marjan TV. Modus were tasked with producing a master plan for the extensive 6 acre site in South Wimbledon and then designed and implemented the first three phases of the project. 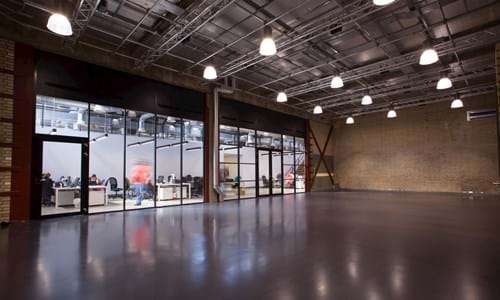 The works involved the construction of three new TV studios and new technical infrastructure including a 25 rack comms rooms with 120kW of downflow cooling, 12 edit suites and data transfer and transmission suites. The power to the site was comprehensively upgraded with a new sub-station providing an additional 1000kVA electrical supply.

The base building was left by the landlord as a bare shell complete with leaking roof and resident pigeons! Everything was rebuilt from scratch including a new toilet block and facilities for both staff and TV presenters. The fabric of the building was upgraded, the roof soffit was insulated and full air conditioning installed to all areas. The industrial heritage of the host building was retained wherever possible and the painted remains of old sets from The Bill are visible around the new double height open plan office spaces.

Modus had just 4 months to transform areas of the building from bare concrete to fully supported and operational technical space – and a further 4 months to build the new TV studios and complete all the open plan office areas.