The client, a specialist in the design and manufacture of high performance Acoustic Resonance wind sensors – also known as anemometers approached Modus to tender for the design and fit out of a newly acquired a 40,000 sq ft freehold in Sunbury. 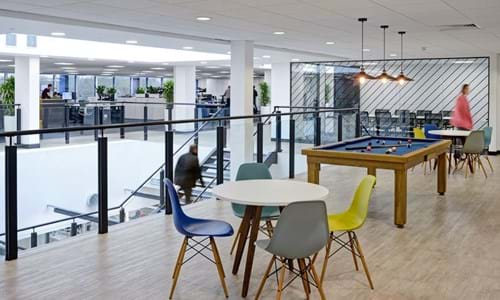 Working extensively with the client and Francis Hunter PM we collected and developed ideas within the context of the space. A redesign of the lobby and staircase along with the groundfloor ‘Superhighway’ underpinned the scheme.

It was a real pleasure working with the FT team and together we have been able to combine an exceptional manufacturing space along with a open plan working environment.

FT Technologies was founded in 1981 and has been in business for over 30 years. FT began selling wind sensors to the wind turbine industry in 2002 and are now the industry’s largest supplier, with 11 of the world’s top 15 turbine manufacturers amongst their customers. FT are the market leader in the offshore wind energy sector as more than 70% of all offshore turbines in the world are fitted with an FT sensor. FT sensors have been installed all over the world in a range of applications from weather stations, marine buoys, on top of some of the world’s tallest buildings and along railways