The design of Alpha FX’s new Paddington office space is a true reflection of the character and personality of the business itself; courageous, punchy, daring and highly motivated, with a love for the finer details and a keen sense of its roots; where it came from, and where it’s going.

Alpha FX CEO Morgan Tillbrook had a clear idea of how he wanted the new space to feel, and with a keen eye for detail, he remained highly involved through the course of the project – every detail and finish was signed off with him, and we produced many iterations and visuals before we settled on the final design. 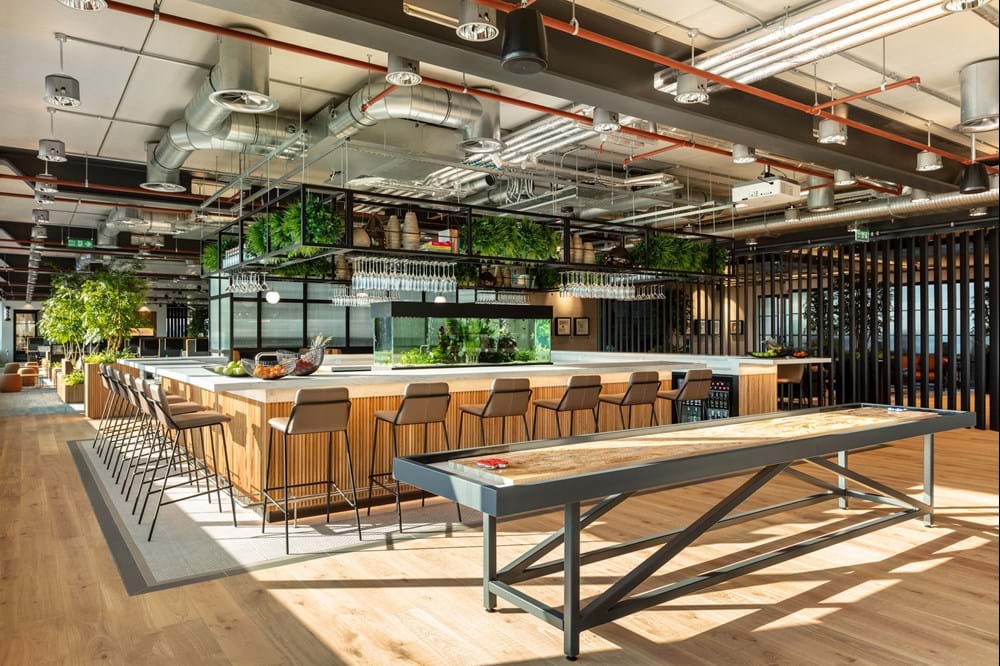 Working in the Brunel Building in Paddington was both challenging and hugely rewarding. The concrete core that runs through the centre of the building and onto the wings had to be left alone – nothing could be affixed to the concrete. This presented several difficulties in creating a design that could fulfil Morgan’s vision while respecting the integrity of the building itself – particularly one that included a large, open-plan workspace, with a lift lobby, gym, barbershop, tech room, meeting room, lounge, presentation room, teapoint, bar and dining area. The task was a sizeable one.

The steel cross-gridding on the exterior of the building created dramatic shadows through the course of the day, as well as complementing the industrial quality of the concrete core within. Added to this, the office’s position within the building lent itself to great natural lighting and stunning views of the city. 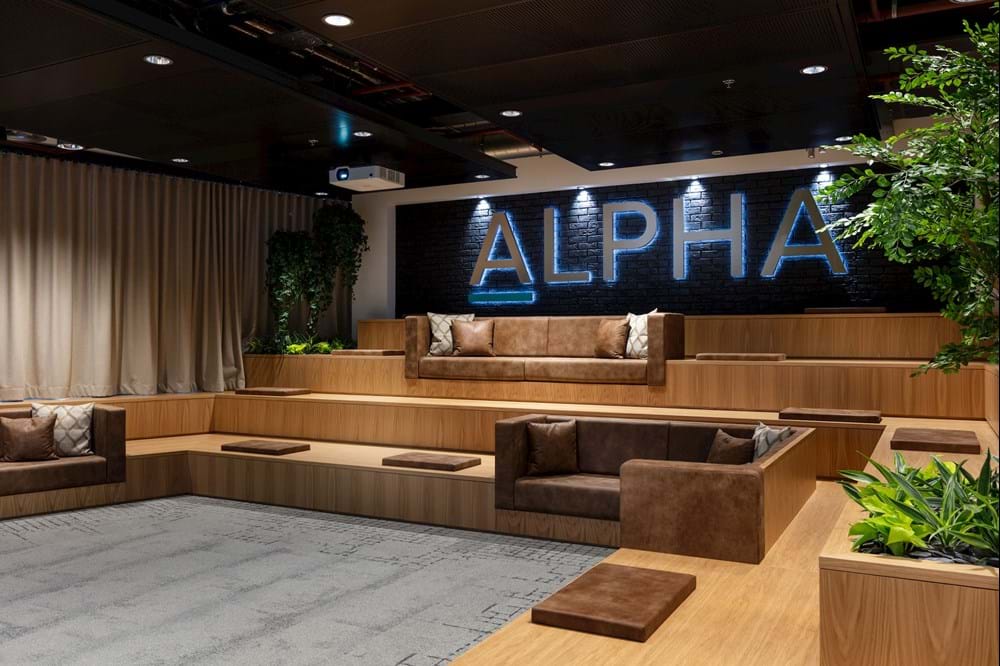 With these two prominent aspects of the building in mind – the core and the steel beams – we created a design that would balance the industrial with the natural, utilizing the harsh, exposed and angular nature of the concrete and steel to create a dramatic working environment, provocative and imposing at first glance but subtly softened and contrasted by natural elements and materials.

The steel cross-gridding on the exterior and the exposed RSJs throughout the office space gave us a great opportunity to create a sense of consistency and continuity between the architecture outside and the workspace within. We highlighted the interior RSJs with orange LED lighting in several areas, celebrating the rich architectural complexity of the building and creating a bold, striking visual. Even the teapoint became an ode to the industrial architecture of the building. The highlighting of the steelwork truly allowed the exterior and interior spaces to sing in harmony. 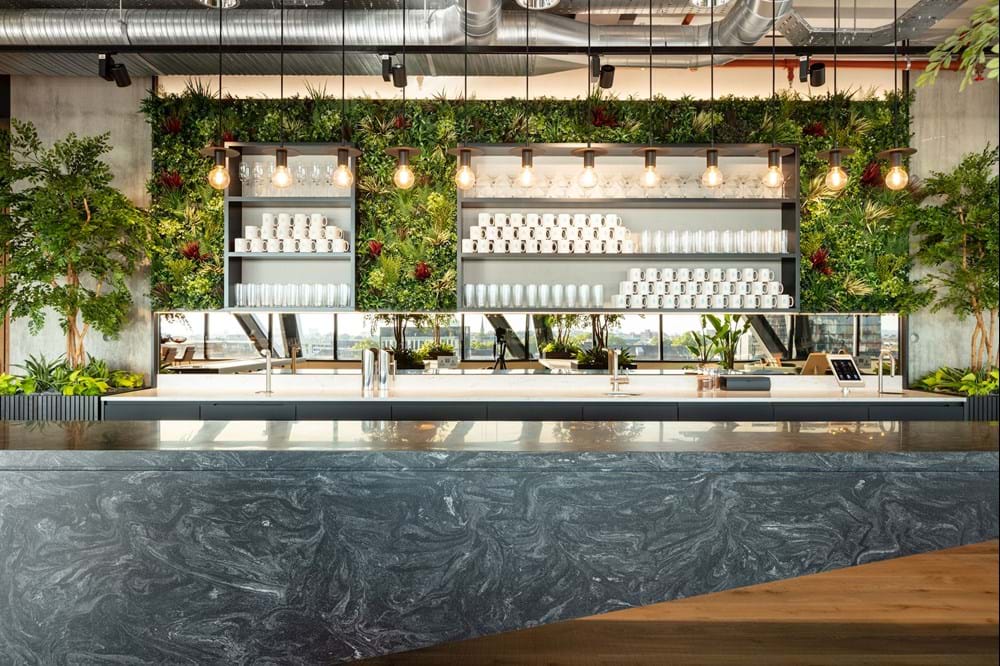 For Morgan, connectivity and a sense of consistency throughout the space was key to the working environment. For example, the timber used in the lift lobby appears frequently throughout the entire office space. What is most striking about coming into the lift lobby, however, is the ‘A’ sign – the first thing visible in the office as you walk out of the lift – offering an immediate, powerful branding message. In an understated yet powerful touch, a ‘red button’ is included in the space that is pressed when a certain percentage of sales is met for the month. When pressed, the ‘A’ glows green – a simple reminder of the team’s success, and a wonderful motivational tool. Everywhere you look in the Alpha FX office, the sense of energy and positive motivation is palpable.

This energy is harnessed in a beautiful interior design that makes use of the natural light levels and industrial finishes, while adding natural elements and finishes, and rounding it all off with pieces of vibrant pop-art that make the space truly come alive.

A key aspect of Morgan’s vision was the idea that everything in the space had to feel like it was placed for a reason, and we designed with this idea at the forefront. The lift lobby features striking, beautiful symmetry in terms of furniture layout, creating a sense of formality and comfort at the same time, contrasted with an abstract rug pattern featuring flecks of yellow that punctuate areas of white and grey. The addition of biophilic elements throughout the office, including a green wall in the teapoint area, helps to balance the strong industrial elements. Everything balances out, and each striking design choice has a counterpart that roots it in an overwhelmingly harmonious space. 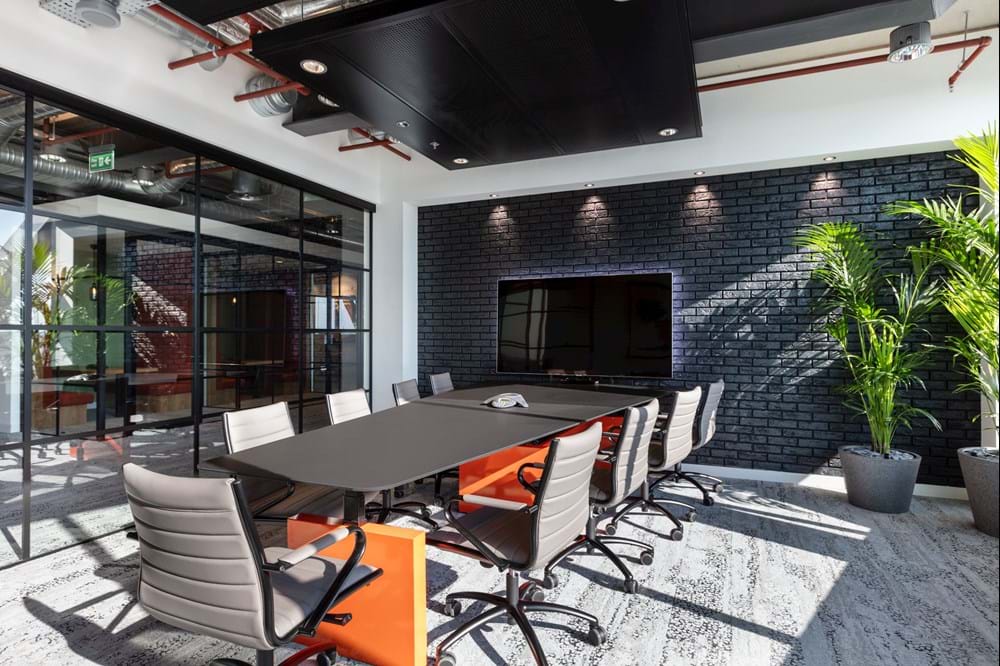 Some of our favourite elements of the space come in personal touches from Morgan himself – the addition of twinned dog statues in the lift lobby, painted in the bold Alpha green, is complemented by a statue of Michelangelo’s David’s head in the meeting room, painted in the same green, with miniature orange steel beams protruding from the eyes of the head, representing laser-focus. These punchy, pop-art inspired pieces bring the whole space to life. Framed Marvel Comic covers line the wall of the concrete core in the main bank of workstations, and a small dog statue that acts as a shoeshiner sits in the natural light-bathed lounge area; he’s been with the company in each of its past three offices.

This link to Alpha FX’s past is something that Morgan feels is fundamental, and it is highlighted in the space in poignant ways; printed on the concrete core is a history of the company since its inception in 2009. Significant space has been left to update the history, as Alpha FX looks towards the future. What is most telling about the printed history, however, are the personal touches it includes; the first office romance, for example, or a trip to Las Vegas that saw one Alpha FX employee meet his future wife. In every facet of the workspace, Alpha FX’s care about its people is tangible, and its new office is a space designed to inspire, to motivate, and to captivate.

Alpha FX’s story is only just beginning, and with their new workspace completed, the future holds limitless possibilities.

Want to see more? Check out their video here!